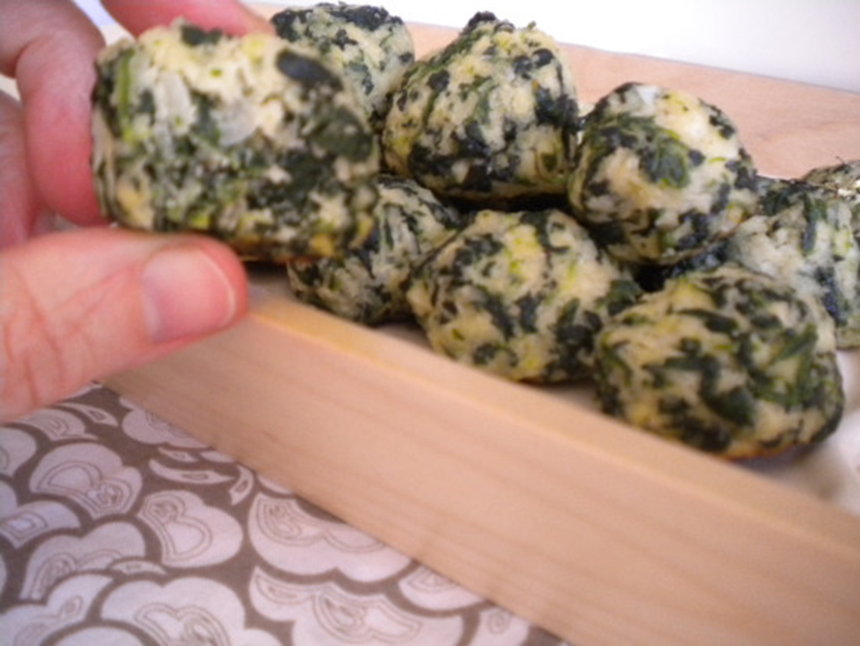 I’ll let you in on a family secret.

It’s about our spinach ball recipe.

My mother started making spinach balls when I was young.  They showed up on the table every time guests walked through the door.  We had them for special occasions and sometimes just because.   My parents, sisters and I all loved them.

A few years back, I asked my mom for the recipe and starting making them when I needed an easy appetizer.  “These are really good,” my friends usually comment.  Almost every time I make them, someone asks for the recipe.   People like them because they are tasty – almost addictively so – but appear to be a somewhat healthy choice.

The secret is that they really aren’t that healthy.   True, the recipe includes about 2 pounds of frozen spinach.  But it also contains 2 cups of bread crumbs, a cup of cheese and ½ cup of butter.  Meaning, they are primarily bread, butter and cheese balls.   No wonder they are so tasty.

My sister Lauren and I were talking the other day about spinach balls.  We were half laughing at how putting spinach in anything makes it seem like a health food – and half lamenting that this great go-to appetizer was SO un-paleo.

At that moment, I decided I should try to come up with a more paleo version of this beloved family recipe.  I aimed for one that tasted as good as the original, but was a slightly healthier choice.

That’s what this recipe is.  It’s not probably a recipe you want to make each week as a way to optimize your health.  It’s heavy on the nuts.  It also contains some dairy, which is not technically paleo – but is something that many paleo/primal folks (like me) eat in small doses.

But, they are a fantastic treat and a sure-fire crowd pleasing appetizer.  Plus, I thought my sisters and parent would get a kick out of seeing our family spinach ball recipe recreated on my paleo blog.

Onion, 1 minced (The easiest way to do this is to use a food processor. If you chop by hand, you’ll need to keep chopping until the onions are minced.)