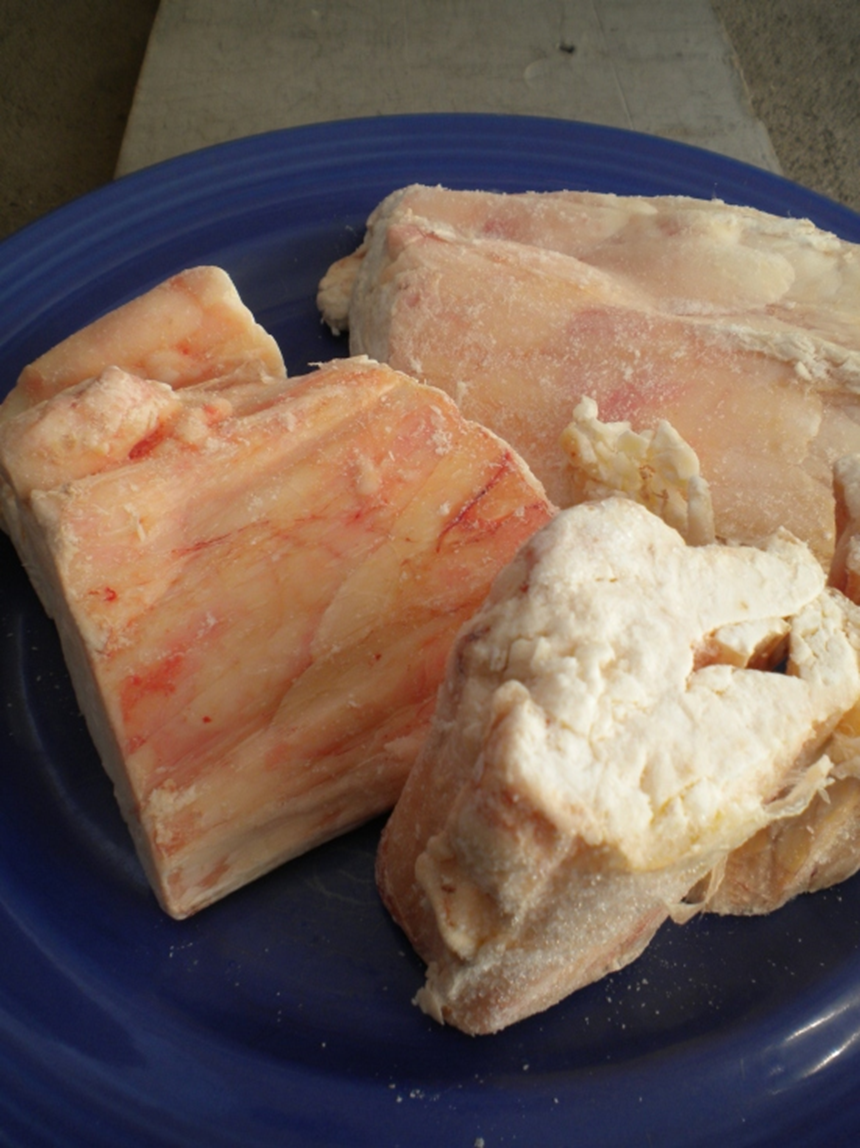 “And do you want any suet?  It comes in ten pound bags,” my cousin Claire asked me as we were finalizing the detail of our quarter cow purchase earlier this year.

“Yes, definitely,” I said with fake confidence.  I only had the vaguest sense of what suet was.  I knew it had something to do with fat and that it was used to make English Christmas pudding – not that I really knew what that is either.  But if came from my grass-fad cow and it was something that people used as food, I wanted it.  I’d figure it out.  Waste not, want not.

A week later, I placed a five-pound zip lock of beef suet in the freezer

“Suet.  It’s something like fat,” I told him.  He didn’t ask any other question, which is good because I didn’t have any answers.

A few evenings later, he told me, “Suet is not exactly fat.  I put a hunk in the skillet with my eggs and it never melted.  It was like a chunk of flesh.  It just sort of burned.”   Hmm…lovely.

Then two weeks ago, the plastic bag of suet got jammed in the cogs of the automatic ice maker and, apparently some of the suet worked its way into the ice making machinery.  We Matt ended up having to cut the bag to disentangle it and operate on the ice maker to get it to work again.  Then Matt started noticing the suet-flecked ice cubes.  Disgusted, he threw out the whole batch of ice.

The next day, there were more “suet cubes”, as he called them.

He dangled the bag of suet over the trash and threatened to toss it in order to ensure we never had to endure suet cubes again.  I stopped him only by promising I would do something with the pinky-white hunks of fat very soon.

So last week, I began my suet research.  I learned that suet is the hard fat that encases a cow’s kidneys.  This next part I’m a little fuzzy on but basically although suet is fat, you need to render the fat to make it useable.

I also learned that suet is used extensively in bird feeders — so extensively that the first page of search results on Google makes no reference to using suet for anything but bird bait. Finally, I found an article of Mark’s Daily Apple about how to render tallow from suet.  Tallow is a fat that can be used in cooking, more like coconut oil.  So, I set about making tallow.

There were a few ways to do this, but decided to do a dry render in the oven.  The process was relatively simple.  I used the food processor to grind a few pounds of suet into tiny bits.  Then I put the bits in a cast iron skillet, turned the oven to 250 degrees, put the pan in the oven and let it sit for two hours.

Suet bits in a cast iron skillet, headed for the oven

I ended up with some yellow liquid (fat) and random chunks of grey stuff (cracklings.)   I poured the fat into a glass container through a cheese cloth — except I didn’t actually have a cheese cloth so I used a cheap white cloth napkin I happened to have– and put it in the fridge.  The tallow solidified into a beautiful, consistent pearly white.

I had read that I should save the cracklings because crispy cracklings make good salad toppers.  But mine were not crispy and tasted like little meaty globs of soft fat.  Kind of gross.  So, sadly, I tossed them.

When I was done, I was curious how the tallow would work.  I used it to cook my eggs.  It gave them a hearty, meaty flavor, which makes sense.

But how would beef tallow compare with other paleo-friendly fat sources, such as olive oil, coconut oil and ghee (clarified butter)?  I decided to run a faux-scientific taste test.  I would make sweet potato fries, making four mini-batches, each with a different fat source.

I ran the experiment but I am still writing up my final lab report.  I will turn it in for your review as soon as it is done.