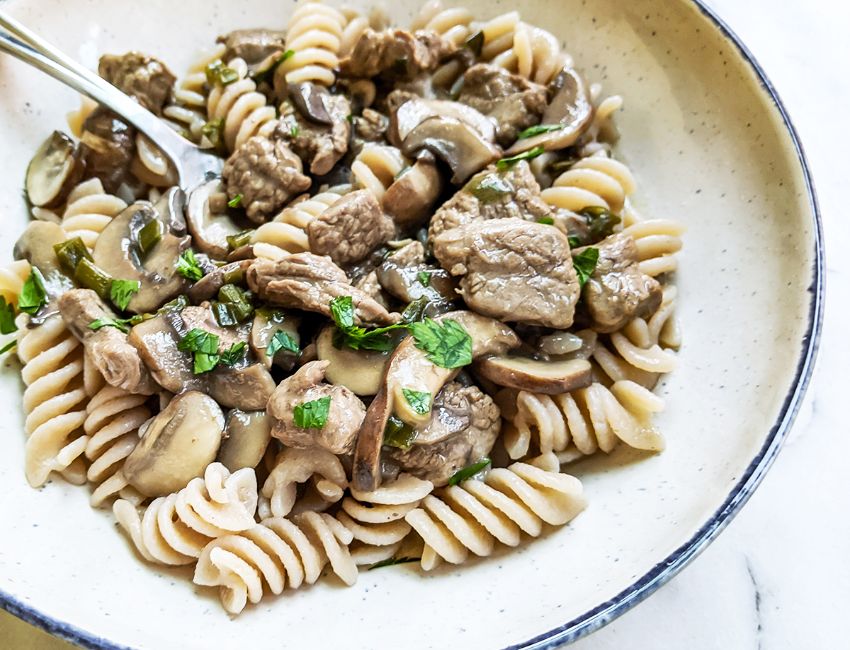 So Wednesday came and went and I never posted my regular Wide Open Wednesday post. I love writing those posts but it just didn’t get done this week. I wish I had a compelling explanation that involved late-night secret phone calls, wild elephants and Matthew McConaughey and culminated in great riches and a spot in the CrossFit Games, but — no. I just got distracted and tired. I’m looking forward to getting back to it again next Wednesday.

A few months ago, I had this idea I wanted to make a paleo mushroom stroganoff. I can’t really explain where the craving came from. My mom made beef stroganoff when I was young but it isn’t a dish that was near and dear to my heart (unlike Spinach Balls or Shrimp Cocktail.) But for some reason, I suddenly longed for a paleo version of this creamy, casserole-y dish. I thought about it for a while and then gave it a shot.

One could argue that stroganoff is a bit of an odd dish to make in 95 degree heat in July – but I’ve made it three times in the past two weeks and really enjoyed it. Perhaps because we’ve been so heavy into summer salads and grilling, it’s occasionally been nice to have a flavorful alternative in the fridge, ready to reheat. In case you feel the same way, here’s the recipe.

Salt and pepper, to taste (about 1 teaspoon each)