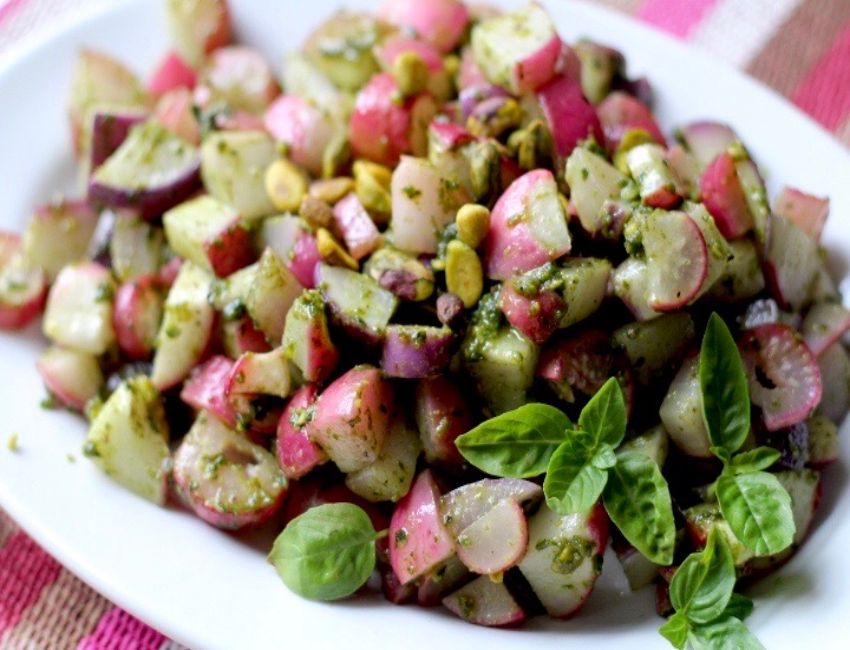 It used to be that I really disliked radishes.  If I encountered one in a salad, I would flinch.  Oh, radish – yuk!

But each year I get bunches and bunches of radishes in my farm share. I wanted to like them. After all, they are pretty little veggies, all round and red.  So rather than give them away, I would keep them in my crisper for weeks, trying to inspire myself to eat them. Eventually, they shriveled and looked unappealing and I would toss them.

That was until one night a few years ago when my friends Petra and Rob were at our house. I mentioned that I didn’t know what to do with the latest radish shipment.

She explained that in Germany, where she grew up, it was not uncommon to serve cold radishes spread with butter.

This seemed extraordinary to me. I never would have thought of this combination in a million years. Radishes, which seemed distasteful moments before, suddenly seemed very European and glamorous.

We pulled out the radishes and Petra prepared them for us that night. First, she sliced them into rounds. Then she salted them to draw out some of the bitterness. After a quick rinse, she topped them with the smallest slices of cold butter. We popped them all down quickly.

Since that time, this has become my go-to radish preparation and I quite like them. I modified the recipe slightly from Petra’s original approach, subbing ghee for butter (to make it more paleo) and topping them with pistachios for crunch.

I have never served these to anyone other than Matt but I can picture myself offering them to guests one day.  “Oh, you’ve never had butter radishes?” I’ll say off-handedly.  “It’s very common in Germany.”

Radish Rounds with Pistachios and Ghee

Ghee, 1 tablespoon (Butter would work too, if you are tolerant of dairy.)